Over the past 150 years, on this day or that, on any wall in the house, a picture might have hung straight or crooked, wallpaper was put up or taken down, wasps sat, a television blared, pollen settled. On most any acre, corn suffered from too much or too little rain, a Buick got a coat of wax, fences were put up or fell down. But today, the layered past has been stripped back to circa 1847, at Island Farm, Roanoke Island’s newest historic site.

A living history site, Island Farm interprets daily life on Roanoke Island in the mid-1800s. The centerpiece of the site is the Etheridge farmstead, where Adam Etheridge built a house on land that had been farmed by his family since 1757. It is the oldest period restoration of a house on Roanoke Island, and includes 19th-century furnishings, some original to the house.

Visitors can explore nearly a dozen buildings, such as the farmhouse, a reconstructed slave cabin, outhouse, cookhouse, smokehouse, dairy, barns, chicken coop, corn crib, woodshed, and blacksmith shop. Nearby, the family graveyard is the final resting place of Mr. Etheridge and many of his descendents, while Crissy Bowser, who lived and worked on the farm, lies buried beneath what is known as the Crissy Oak.

Also on the grounds is a kitchen garden and cornfield, and chickens range freely. Sheep, a cow, and a horse graze in the pastures.

Exhibits in the Visitor Center help put daily life on the farm into historical context, with information on island culture, fishing, farming, boatbuilding, windmills, slavery, and the Freedmen’s Colony.

Since Outer Banks Conservationists added this project to its nonprofit work nearly a dozen years ago, much research has been done with the help of archaeologists, historians, architectural historians, and experts in period furnishings.

Without the generous contribution of Etheridge descendants, Lee Zenovah Salet, Lou Salet Glad, and Natalie Salet Peterson, Island Farm would no longer exist. They donated the original farm house and one-half acre of land to OBC in the 1980s.

OBC is also grateful to Allen and Lorna Daniels, owners of Roanoke Island’s oldest restaurant, Darrell’s, the locals favorite, who both donated property as well as made the acquisition of additional farm property available at less-thanmarket value. OBC thanks the Daniels family for their contribution to persevering our island’s history and culture. 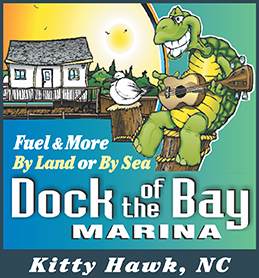